How Much Value Has the Energy Industry Destroyed?

While economies, industries, and companies develop in cycles, it is tough to call the beginning and the end of the cycle when you are out on the playing field rather than sitting back and watching the replay.

From the end of 2013 to early 2016, energy companies (MSCI World Energy Index, USD) lost 35% of investors’ money compared to the practically flat performance of MSCI World.

Were there common and objective industry “red flags” that could have been spotted in advance and thus disastrous investments averted? To determine an answer, I looked into energy industry health from three different angles: financials, valuation, and industry structure.

In industry up cycles, everyone is happy and carried away by one big promising idea. Growth is often driven by a particular segment, region, or product group with excellent prospects.

Corporate optimism results in increasing investments — disproportionately growing capex, M&A at substantial premiums, and, consequently, fast asset base expansion. Free cash flow generation slows or dips into negative territory while accounting earnings spike across the board. Booms affect not only the industry in question, but spill over across the value chain, resulting in inflation in labor, rents, and fat supplier margins. Increased leverage may or may not fuel super growth, but it definitely makes the industry more vulnerable when a downturn occurs.

Corporate optimism is accompanied by investor optimism. Valuations of the overheating industry become increasingly detached from its past multiples and the broader market.

Pricing for industry products is strong and growth prospects are sunny, thereby encouraging more participants to enter and compete in the market. Fragmentation increases.

But often expectations about lasting strong demand prove too rosy for all those investments to receive the expected significant return. That’s when the tide turns.

When Could We Have Seen It Coming?

The energy industry started displaying symptoms of declining health as early as 2004–2005. Over the decade from 2003 to 2013, however, the assets of industry participants almost tripled, goodwill grew by 160%, capex ballooned by a staggering 250%, while free cash flow collapsed to almost zero. Opex grew by 58% from 2003 to 2013, with notable acceleration in the last five years.

Persistently high oil prices fueled interest in high-cost field development, from US shale to deepwater offshore fields in Brazil and Angola. Industry fragmentation increased. The number of MSCI World Energy Index members almost doubled from 61 in 2003 to 117 in 2013. The main drivers of energy industry over-investment? Optimism about China’s never-ending growth, concern about existing reserve depletion, and reliance on OPEC for price support.

Reflecting market optimism about the industry, relative and absolute valuations for energy companies spiked pre-crisis and recovered shortly thereafter in 2009–2010.

The oil boom had a spill-over effect on industrial companies. Some produced technologically advanced and costly machinery to extract supplies from increasingly hard-to-reach places. Others produced sophisticated and similarly expensive equipment to increase energy efficiency, thus reducing the need for the above-mentioned resources, leading, among other factors, to a decline of oil consumption in developed markets over the last decade.

While oil and gas producers and their supply chains were enjoying the party, high energy costs and government subsidies boosted investments in renewable energy and electric vehicles — constituting a potential threat in the long run.

As soon as the results of investments started coming to the market en masse, it became clear that they were too much for the demand to absorb. OPEC refused to act as the savior of last resort and flooded the market with oil instead. The tide turned.

Where Are We Now?

The past year and a half has been tough for the energy industry. Oil prices collapsed to 12-year lows before rebounding slightly, capex was slashed and supplier margins squeezed, assets were written down, free cash flow and earnings turned negative, cost of debt spiked, and among the shakier players, bankruptcies ensued. Absolute and relative valuations of energy companies dropped to the lowest level in 19 years.

As the cycle unwound from the end of 2013 to January 2016, after a decade of optimism and over-investment, $1.5 trillion in value was erased from the global energy industry.

While its hard to say how long it will take for the capacity built up during the last 10 years to adjust or how fast the substitutes for fossil fuel demand will gain mass acceptance, cyclical industries are often a better investment at the cycle bottom.

China has just 100 vehicles per 1000 people, decline rates for existing reserves still remain high, and electric vehicles account for less than 1% of vehicle stock. Investors in the industry have a higher margin of safety now than they did two years ago. 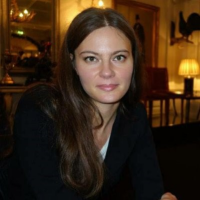 Jelena Sokolova, CFA, is a senior research analyst and member of the research committee at CE Asset Management AG in Zurich, Switzerland. She has 5 years of equity research experience covering European large caps with a generalist focus. She has a Master’s degree in International business from Riga International School of Economics and Business Administration (RISEBA).

1 thought on “How Much Value Has the Energy Industry Destroyed?”