The Power of Passive

Explanations for the mass exodus from active to passive funds have included low stock dispersion and a long bull market. But William F. Sharpe’s fundamental arithmetic makes no assumptions about correlation or the direction of the market.

Because the flood into passive management appears unstoppable, it is worth considering the limits of the trend.

In “Active vs. Passive Investing and the ‘Suckers at the Poker Table’ Fallacy,” Druce Vertes, CFA, asked, “What would happen if everyone was a passive investor except Warren Buffett?” He concluded that the sole remaining investor would achieve considerable wealth by buying initial public offerings (IPOs) and selling the shares when they are included in an index.

Lasse Heje Pedersen went a step further and calculated the equilibrium expected return of this strategy. In the model-limiting cases — when all investors are “active” or all investments are included in the index — all investors hold a float-weighted portfolio.

If IPOs followed the same Dutch auction process as a Treasury bond issuance, it could create an investable index containing all stocks. Index funds could enter non-competitive bids for immediate exposure. (If the offering is large relative to the rest of the index, competitive bids may be required to maintain a float weight.) The index fund would not need to buy additional shares at a later, higher, post-IPO price. This reform could not only benefit index funds by bringing them closer to a float-weighted portfolio, it could help companies raise capital at a higher price.

In David Goldreich’s model of uniform auctions, average underpricing is proportional to price uncertainty and disappears as the number of bidders grows arbitrarily large.

Any delay between bid submission and the delivery of auction results would create uncertainty. As an extreme example, suppose a flash crash occurs just after you submitted a bid. If your bid is accepted and the auction price does not reflect the new market conditions as a result of other early bidders, you might suffer a large loss. From another perspective, fully invested competitive bidders would face a choice between selling holdings before the auction to acquire cash, risking underinvestment if their bid is not accepted, or face the risks associated with leverage after an accepted bid until other securities are sold.

If bids were denominated in shares of an index-tracking exchange-traded fund (ETF) rather than cash, winning bidders would sell the index fund and receive the IPO shares in return. The investors would have no net market exposure and no need to raise cash for an uncertain result. The issuing company and selling insiders would need to sell the fund shares to receive cash.

Taking this a step further, requiring auctions for insider sales and company repurchases would reduce insiders’ ability to profit from information asymmetry. Investors could incorporate knowledge of insider intentions to sell before buying shares. Any pattern of share repurchases before insider sales would become observable. Finally, it would allow accurate calculation of the float intra-quarter, so index funds could more tightly track a float-weighted objective.

If this reform seems implausible but potentially beneficial to index fund investors, remember the power of index funds and the following passage from John C. Bogle’s recent essay for the Financial Analysts Journal:

“The US shareholder base is now dominated by a fairly small group of very large money managers, each with abundant information . . . and substantial holdings in virtually every large publicly held corporation . . . but individual institutional investors cannot do it alone. They need to work together, in each market, to develop agreement on a broad national set of principles.” [Emphasis added]

If you find this concentration of power unsettling, you are not alone. Research suggests firms have begun shifting pricing behavior in response to common ownership across competitors. That means controlling stakes in all competing firms in an industry by one or a few similarly positioned asset managers reduces the incentive to reduce prices. A price-cutting executive who increases firm profits at the expense of industry profits risks elimination by portfolio maximizing fund managers. However, regulators do not yet see common ownership as an anti-trust issue.

Although I know of no data showing the influence of fee differences on merger voting, there is statistical evidence that active equity fund managers have allocated more underpriced IPOs to higher-fee funds than to lower-fee funds.

Despite these potential issues, I do not believe index funds are worse than socialism as analysts at Bernstein suggested. Although it is unclear how much an investor could profit from submitting competitive bids in an IPO auction alongside non-competitive index bids, the price would still be set by the marginal bidder. Unless non-competitive bids become so large that an auction’s clearing price could be set by someone colluding with insiders to inflate the price, an auction can serve as a decentralized mechanism to gather valuations without excluding the demand of the price-insensitive investors.

Investing, including the use of index funds, is largely voluntary. One exception is public pensions. Participants in public defined-benefit pension plans do not get to choose an asset manager.

Why is this noteworthy? Because the US Supreme Court ruled in Janus v. AFSCME that public union dues are a form of political speech. And fund managers have weighed in on the gun control debate: Some asset managers stated they would not only talk with gun manufacturers and retailers, but also monitor their lobbying activities. Are pension contributions then also political speech if the voting rights associated with a pension’s assets are used to pressure portfolio companies to participate in or stay out of political issues?

This final, political, point is not specific to index funds. Instead, it highlights the non-accounting value of the rights investors increasingly lend to a fairly small group of very large asset managers. It is unclear when or if the mirage of a free lunch through diversified low-fee funds may turn into a costly tragedy of the commons.

In the short term, index funds’ market share — and therefore the power of asset managers with economies of scale to affect change both in the market and in politics — shows no sign of receding. 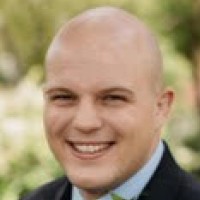 Charles Fox, CFA, is a financial adviser at Integrity Wealth Partners. He strives to help families make financial decisions that are aligned with their goals. He also contributes to the team's investment research. Fox graduated from Princeton University in 2013 with a degree in operations research and financial engineering. He can be contacted at Charles@InvestWithIntegrity.com.

1 thought on “The Power of Passive”