Although the language of time series analysis can seem specialized, practitioners can maintain a competitive edge by knowing how to interpret the results of time-series studies. In finance, time series are ubiquitous, and so knowledge of such things as what unit roots are or how to control for heteroskedasticity can be useful in evaluating reports. Financial reports make claims with investment relevance, and analysts need to know how to evaluate whether the reports provide solid evidence for claims.

For example, amid all of the political wrangling in DC over tax rates for the wealthiest Americans, a recent paper from the Congressional Research Service, “Taxes and the Economy: An Economic Analysis of the Top Tax Rates Since 1945,” drew the ire of Senate Republicans. In the study, the author, Thomas L. Hungerford, concluded that reduction in the top tax rates has had little association with saving, investment, or productivity growth, but were associated with the increasing concentration of income at the top. This conclusion was not overly popular with that party, so the paper came under fire for some of his methods used (or in this case not used) to support its points.

With sixty observations (years) and time series analysis, it’s as difficult to refute as to support the belief that lower top-tax rates are associated with growth. Hungerford used a standard set of analytical tools, which are nicely explained in Damodar N. Gujarati’s basic econometrics text or Escudero’s “A Primer on Unit Roots and Cointegration.” For time series regression, the series need to be stationary (constant mean, variance, covariance). Hungerford controlled for heteroskedastic (nonconstant variance) and autocorrelated (correlated with themselves over time) error terms, using the Newey-West method. He also tested for unit roots (if the root/slope coefficient on the lagged value of the time series variable is unity, the series is a random walk and nonstationary). By first differencing several variables, Hungerford was able to convert to stationary series. All this follows standard analyst procedures, but the interesting aspect of statistical analysis is that there are always more ways to slice the data.

At the heart of Hungerford’s analysis is the relationship between changes in GDP and changes in the top marginal tax rates. Because he found no significant relationship between these, Hungerford took his analysis as supporting the idea that reduction in the top tax rates has had little association with saving, investment, or productivity growth. What then are the possible criticisms of this type of time series work?

To be informed consumers of financial reports, analysts must be alert to the challenges of multiple regression with time-series variables. (Because most reports involve such variables, analysts even need to be alert to multiple regressions run without recognition of time series issues.) Our conclusion with the Hungerford article is that the association or lack of association between lower top tax rates and economic growth remains an open question. 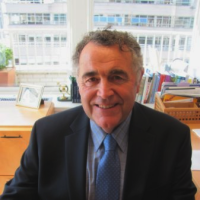