Municipal Bonds: How Much to Hold?

“What percentage should I hold in municipal bonds?”

This is an important question for taxable clients in the United States. The tax-exempt status of municipal bonds is a uniquely US phenomenon, ingrained in the federalism that undergirds the original foundation of the Republic.

In 1910, New York governor Charles Evans Hughes, who later became Chief Justice of the US Supreme Court, spoke out against the 16th Amendment to the US Constitution. The amendment, which was ratified in 1913, declared:

“The Congress shall have power to lay and collect taxes on incomes, from whatever source derived, without apportionment among the several States, and without regard to any census or enumeration.”

Hughes took exception to the clause that Congress could levy income taxes “from whatever source derived,” including municipal bonds. He believed this would “excessively” centralize governmental power in Washington, DC. The 1913 tax code created a federal tax exemption for municipal bonds under the principle of “reciprocal immunity.”

This is what I have seen in many of the legacy portfolios I inherited from other investment management firms. Despite the advantages of municipal bonds, most US investors would prefer to diversify their sector exposures in a bond portfolio — just as they would in an equity portfolio. This is partly due to the smaller size of the municipal bond market relative to other sectors. Municipal bonds make up less than 10% of US bonds outstanding.

One way to determine the appropriate tax-exempt exposure in a bond portfolio is to maximize risk-adjusted return by obtaining the highest Sharpe ratio. While past is not prologue, history is useful in understanding relative allocations between taxable and tax-exempt securities in a bond portfolio (in terms of the highest historical Sharpe ratio). Evaluating long return histories has the advantage since past outcomes, both favorable and unfavorable, are included in the analysis.

The primary index used to answer the ideal exposure question is the Bloomberg Barclays Municipal Bond TR Index, and I used data from 1980 to the present. To be sure, there are other municipal bond indices — Bond Buyer‘s 20 General Obligation Index, the Median Par AAA GO Index data from Municipal Market Advisors, and S&P’s Municipal Bond Index, to name a few — but none have the diversity, breadth of composition, and length of history as the Bloomberg Barclays, even though municipal securities have been around for hundreds of years.

When I compared the risk, the pre-tax equivalent return, and the correlation of tax-exempt bonds, as represented by the Bloomberg Barclays Municipal Bond index, to investment-grade bonds, as represented by Bloomberg Barclays US Aggregate Bond Index, from 1980 to the present I found the ideal allocation is approximately 60% to tax-exempt bonds. This ratio obtains the highest Sharpe ratio of 0.9. Using the previous 15 years as the study period, I found an optimal allocation of 55%. This is in line with the longer study results.

Source: Morningstar, Koss Olinger. A tax rate of 39.6% was applied to generate pre-tax equivalents. The average marginal tax rate at the highest tax bracket was 39.9% while the mode and median over the period were 39.6%.

There is no reason to believe that the historical correlation of taxable bonds to tax-exempt securities (0.67) is likely to change in the future. Expected return, as given by the current yield-to-worst (YTW) on the respective indices, also reveals that the future tax advantage of municipal bonds is not changing anytime soon. The current YTW of 2.25% on the Barclays Municipal Bond Index, grossed up to 3.69% on a pre-tax equivalent basis, still offers more than 100 basis points (bps) to the 2.60% YTW on the Barclays US Aggregate Bond Index.

Half of a core investment-grade US bond position in tax-exempt securities, therefore, could be justified if the goal is to maximize risk-adjusted return over the long run.

There have been years when correlations dropped severely and the advantage of diversification was acute, when market supply and demand was quite different across bond markets. In 2008, for example, the investment grade bond market returned 5.24% while tax-exempt bonds generated a -2.47% return. The unique municipal market of 2008 was infused with too many sellers versus buyers, as large financial institutions, including such insurance companies as AIG, unloaded their municipal securities in an effort to generate much-needed liquidity.

Since 1980, the median difference of absolute annual returns has been 1.91% before taking into account the pre-tax benefit of municipal bonds. That’s a material difference in terms of absolute bond returns.

So, how much should a taxable bond portfolio hold in tax-exempt securities?

It still depends on many factors, including the investor’s age, aversion to risk, time horizon, and tax sensitivity. But the advantages of tax-exempt municipal bonds are such that their allocation to a taxable bond portfolio should be significant.

Tax-exempt bonds could potentially be more important in the future as municipalities issue more debt to build out infrastructure and close deficits brought on by pension liabilities. In the early 1980s, municipal issuance was as much as 20% of total US bonds outstanding, twice the percentage today.

While the US Congress and White House may seek to reduce the income benefit of municipal bonds by lowering marginal income tax rates, the original intent of the exemption is likely to go unchallenged. It is also worth noting that little overall federal tax revenue is lost from the exemption.

Image courtesy of The Cooper Collection of U.S. Railroad History 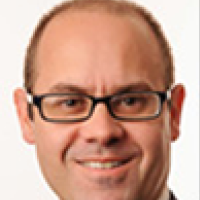 Benjamin Doty, CFA, is senior investment director at Koss Olinger & Company, based in Gainesville, Florida. Prior to Koss Olinger, he worked at Galliard Capital. Doty began his investment career as a credit analyst for a municipal bond fund. He received a bachelor’s degree in economics and an MBA from the University of Georgia.

2 thoughts on “Municipal Bonds: How Much to Hold?”