Timing the Market: Momentum and Beyond

For many investing is all about predicting returns. Unfortunately, stock market returns are (almost) unpredictable and this cautions against pursuing the elusive gains of market timing.

On the other hand, standard finance theory suggests that investors should care about risk-adjusted returns — captured (for example) by the Sharpe ratio — as opposed to mere returns. The good news for active managers is that this variable already has interesting predictability. And other long-short equity investment factors, such as momentum, have Sharpe ratios that are, surprisingly, even easier to forecast.

Remember that the Sharpe ratio is expected return divided by volatility. Active managers often focus on trying to predict the numerator of this ratio. This is exciting and entertaining but is also most likely a siren song. The denominator, volatility, is the part with important predictability.

The Nobel Prize-winning work of Robert Engle and Clive Granger, among others, established that risk varies over time in the economy and in financial markets. Nowadays, the evidence for time-varying volatility is so compelling that we can be more confident saying risk varies over time in the stock market than stating there is an equity premium in the first place! (And don’t get me wrong, the existence of an equity premium is backed by pretty strong evidence, too.)

Furthermore, as Engle said, the implications of this time-varying volatility are probably “not fully absorbed in financial practice yet.” Academic research in finance has probably not fully incorporated these implications either.

Time-varying volatility coupled with almost unpredictable returns (namely using volatility as a predictor) implies that the ratio between the two variables — the Sharpe ratio — must have some predictability after all. This simple observation drives an examination of the usefulness of volatility to time investments in factors. My research first focused on this by looking at a factor other than the market: momentum.

Momentum: Puzzles within a Puzzle

Momentum is a popular investment strategy that involves buying assets that have performed well in the recent past (winners) and shorting those with recent bad returns (losers). This strategy has delivered positive returns in a long sample of US stock data from the 1920s until today. Buying stocks performing well in the previous 12 months and selling those that performed badly in the same period has monthly returns of approximately 1% that are not explained by well-known risk factors. Similar evidence has been found for most international equity markets, for historical samples such as Victorian England and Imperial Russia, and for other asset classes as well. The pervasiveness of momentum coupled with its intriguing nature — why should stock market returns persist in the short term at all? — make it a central anomaly in financial markets.

Despite its profitability, momentum also has a dangerous dark side with considerable tail risk. On rare occasions, momentum has produced intense crashes that were even more pronounced than those of the stock market. For instance, the strategy suffered a return of -91.59% in 1932 and -73.42% in 2009. In both cases, the losses occurred in only a few consecutive months.

My paper “Momentum Has Its Moments,” written with Pedro Santa-Clara, chair in finance at Nova SBE, studied the time-varying volatility of momentum and its usefulness in managing exposure to momentum and its crashes. We find the volatility of the strategy varies substantially over time in a predictable manner. The (annualized) realized volatility of momentum varies between 3% and 128% — a much stronger time-variation than that of the stock market. Furthermore, more than half of this time-varying risk is predictable in real time. This is about twice the predictability of stock market risk in the last 50 years.

In our ongoing work, Paulo F. Maio and I extend the study of risk-return trade-offs to other well-known equity factors. One interesting result is that the “betting-against-beta” (BAB) strategy has risk management benefits like those of momentum.

So, these strategies that are already puzzles in their own right — momentum and BAB — also have intriguing risk management benefits. In fact, they both tend to perform worse after high levels of risk.

These findings do not explain the existence of anomalies in the first place. Rather, they improve our understanding of important aspects of their behavior. They also have potentially interesting implications for active managers. In general, they seem to confirm Engle’s view that financial practice has yet to fully absorb the lessons of time-varying volatility. In particular, active managers are well-advised to pay close attention to the denominator in their Sharpe ratios. 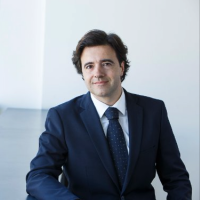 Pedro Barroso began his career in Portugal’s National Statistical Office (INE) working on analysis of macro data (CPI and confidence indices). He then worked as an invited lecturer in several private universities in Portugal. In 2012, Barroso finished his PhD in finance at Nova SBE (Lisbon). He was a lecturer at University of Exeter, and is currently a senior lecturer at UNSW in Sydney. Barroso has also worked as a consultant for a central clearing counterparty in risk management. His main research interests are in factor investing, portfolio management, and the currency market.

1 thought on “Timing the Market: Momentum and Beyond”