Equities May Not Deserve Their Bad Rap

By Robert Stammers, CFA
Posted In: Drivers of Value

Editor’s note: We spoke with Gerry Fowler, CFA, Global Head of Equity Strategy at BNP Paribas in London. Late last year, Gerry authored a report on the outlook for 2013 called “Epic Distortions.” We asked him to share some of his thoughts. This is the first of two conversations with him.

CFA Institute: In your outlook for 2013, you say you expect global equities to move marginally higher. You also see central banks and politicians continuing to distort asset prices and economic activity throughout the year. What are the takeaways for investors?

Gerry Fowler, CFA: A lot of central bank and government policy is creating some very odd distortions in the equity and derivatives markets. Ultimately, we come to the conclusion that the governments and the central banks have the capacity to continue distorting markets through 2013, which is why our year-end index performance targets are high single digits in most markets. The S&P 500 is one of our favorite markets in the world because it’s got reasonable returns and high quality, and we’re expecting low volatility. Some of our least-preferred markets are those in Europe.

What catches your eye as a theme?

So, you’re saying the pace of deleveraging is the indicator to follow. How do you measure that pace?

Ultimately, it’s about whether nominal credit grows or declines. Using this measure, we have a significant preference for U.S. markets over European markets.

In Europe, not only is there no credit growth; there’s a serious risk of asset-price deflation, and there’s no economic growth either. So even though they are not growing their debt pile and they may even be shrinking the absolute value of the debt, Europe is not actually deleveraging. The problem is that reduced debt is causing reduced growth as well.

How credit growth and nominal GDP change over time drives the market, and if you look at the pace of deleveraging, the United States looks a lot better than Europe. The U.S. government is leveraging up to allow households to deleverage. But overall, the United States is still a deleveraging system, thanks to the help of some austerity from households, a decent amount of inflation created by the Fed, and some growth created by the fiscal stimulus.

What does this mean for equity investors?

Nominal GDP growth is most closely linked to revenue growth when it comes to equity analysis — not earnings growth, but revenue growth.

Our economists are forecasting nominal GDP growth of 4.4% in the United States, whereas it is expected to be only 1.4% in Europe (and all of that in Europe is inflation because we’re actually forecasting a continued recession in Europe). The difference in nominal GDP growth between the United States and Europe could be 3% in 2013. This will drive the revenue environment for corporates, and ultimately, since we’ve still got a relatively contained cost basis for most companies, earnings for U.S. corporates should rise, whereas that’s less probable for European companies.

Are there any bright spots on the European map?

We really like Germany for the long term. Germany probably has the greatest capacity of any country in the world to stimulate its own economy and to stabilize the European economy. But in the short term, the Germans are reluctant to do so because they’re so focused on austerity, low inflation, and ensuring that structural changes are implemented. Therefore, they’re not getting any growth at the moment. In Germany right now, the pace of deleveraging is quickening, there’s lower credit growth, and GDP growth is dropping as well. We’re a little bit concerned in the short term that the German DAX index is defying gravity, that we might have a pretty sharp pull back before the German government is forced to do something either to support its domestic economy or the European economy. So, there might not be a better opportunity than now to invest in this pillar of strength in Europe.

What else is on your mind regarding 2013?

I definitely see investors continuing their hunt for yield. The trend is absolutely massive. It’s a topic that everyone is interested in, but we’ve looked at it in a slightly different way than usual. The hunt for yield is not just about Baby Boomers retiring and needing income-generating instruments. The hunt for yield is also a direct consequence of a deleveraging world, where people want to use less debt (or they’re incentivized to use less debt) but there are no defaults. That’s what monetary policy is doing.

How does this world of no defaults operate?

Zero interest rates around the world, even zero 10-year interest rates, combined with quite tight credit spreads, mean that there are a lot of companies that would otherwise not exist that continue to exist.

They are able to pay back their bonds when they mature. So, the cash does exist. It’s not being defaulted on and disappearing. It’s being returned to the fixed-income investors. However, even in Europe, we think there’s going to be €200 billion less issuance of debt securities from banks and non-financial corporates. We expect that €200 billion will have to be invested in property, sovereign bonds, and capex. Some of that money may be put into equities.

What most people are doing now is avoiding capex spending because they’re not seeing growth. They’re reluctant to invest in peripherals or property without yield. In general, we think yield exists in equities that is safer than expected. The Fed is creating US$85 billion of new money every month. That money has to find a home, and it will find a home in something that is considered safe yield.

In the United States, when it comes to safety, people first of all saw the Fed rate drop to zero, so there was a negative real yield on overnight money at the Fed. Then people started hunting for yield in the sovereign treasuries, so the 10-year yield is now down below inflation levels. Then, when that became unappealing, they started looking at the BBB corporate bond yields, which are also now down to about 3.5% and not particularly attractive because it’s only marginally above inflation. You’ll probably get a little bit more compression there. There’s also a high-yield bond spread at about 6%.
I think in the United States in 2013, you’re going to get very good performance from high-yield bonds. They could compress into 5% yield to maturities — simply from this hunt for yield trend.

Ultimately, what this shows is that no one is really comfortable yet in bidding for the yields that we think exist in equities. And that’s because they’re scared of earnings falling. If earnings drop, the yield comes down without anyone making money. But we think the earnings are actually pretty stable through 2013. And the bid for yields will eventually come into equities and push up valuations globally and in the United States. 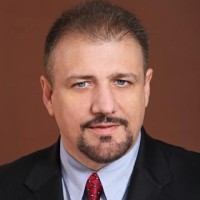 Robert Stammers, CFA, was director of Investor Engagement for CFA Institute and was responsible for increasing the use and distribution of Future of Finance and CFA Institute content by various audiences. Prior to joining CFA Institute, Stammers was the principal for his founded company where he consulted for real estate owners, lenders, and syndicators to develop and analyze structured real estate investments. There he devised strategy for obtaining debt and preferred equity capital and created finance-related marketing materials and research papers for various clients. Stammers has authored over 100 articles on various financial and investment topics for such investment periodicals as Forbes and Investopedia. He served as a senior equity analyst, where he was responsible for the creation of new investment tools and instructional products to provide the revenues for two new investment education companies. As a senior executive for several institutional fund managers, Stammers was the portfolio manager for a $1 billion enhanced real estate fund, a $1.2 billion private timber fund, and several pension fund separate accounts.