Bitcoin is the Linux of payments. And its killer apps will be for US dollars.

I was scanning the news the other day, and someone on Hacker News mentioned that half the items above the fold on StreetEYE were about Bitcoin. And I said to myself, I haven’t seen the neckbeards this excited since the early days of Linux.

And it hit me, Bitcoin is the new Linux.

Go back to 1998, the days of The Cathedral and the Bazaar and the Halloween Document, when open source zealots were gleefully foreseeing the day when freedom-loving hackers would take down the evil Microsoft empire.

Linux was how virtuous hackers were going to end the hegemony of robber barons who stifled freedom and innovation and extracted monopoly rents.

And a glorified screwdriver shop called VA Linux Systems went public at $30 and hit $320 on its opening day.

And 15 or so years later, what happened? Well, VA Linux is now pretty much forgotten.1

And yet, Linux won the internet and Microsoft has lost relevance. Linux underpins the web — sites like Google and Amazon and devices like Android and Kindle. Apple is still (even more) proprietary, but everything they do is built on Unix foundations.

Where is the promised utopia? Isn’t it just a case, to quote the rock band The Who, of “new boss, same as the old boss”? Sure, the world is a better place because operating systems (OS) and the web are commoditized and are not Bill Gates’s private playground. There is more innovation because people don’t fear that everything they invent will become a bundled Windows OS feature.

Linux is the ubiquitous plumbing of the internet, but does it drive the tech agenda? The tech game is basically the same, isn’t it?

Two killer apps built around Linux are Android and Amazon Web Services (AWS, which has many of the network and platform effects of an OS). How different are they from the old Microsoft platform? Like the old Microsoft ecosystem, Android and AWS are open enough that people can build great software and services on top of them and yet are closely directed by a benevolent (we hope) dictator for life with a strong financial interest in their success.

And very closed, proprietary ecosystems are still around: Only Apple can make an IOS device, and only Apple can decide what software can run on those devices. Not to mention, Linux powers numerous completely closed devices and mostly closed social platforms, such as Facebook.

Linux “won,” and its killer apps are not totally open platforms that are completely different from Microsoft’s.

So, I predict that the killer apps for Bitcoin will be in US dollar transactions.

On the one hand, the open payment application programming interface (API) and public blockchain are legitimate innovations and have applications for property records, stock transfer agents, and so on.

On the other hand, the money unit seems like the biggest step backward in money since the Rai Stones of Yap (pictures). Like the Rai Stones, much greater resources have to be spent to manufacture Bitcoin than the bits are actually worth. And moving them around securely and conveniently is not as easy as it should be.

There are a lot of currencies one can exchange for goods and services: US dollars, yen, euros, rubles, subway tokens/stored value cards, Club Med beads, frequent flier miles, and the list goes on. Yet, 81% of international trade is settled in US dollars and 62% of central bank reserves are in US dollars, and these numbers do not appear to be falling rapidly. The market has sort of spoken.

Thought experiment: What if a comic book super villain (or superhero) decided to build a replica Fed across from the Eccles Federal Reserve Board building and offer its own currency and payment system with the intent of supplanting the US dollar? What do you think would happen? Would no one adopt it or would it co-exist in some way with US dollars? Or would it be able to take over, and what would it take for it to do that? A cheaper payment system? A more open API? A system designed to maintain the currency’s value? What kind of value proposition improvement does it normally take to overcome an entrenched competitor?

But Bitcoin doesn’t have The Joker asking “Who do you trust! … I’m giving away free money.” Just the opposite! There’s an inherent conflict between managing a currency to be liquid, flexible, and supportive of a growing economy and being an asset that is a long-term store of value. Some currencies, such as the old Deutschemark and the Swiss franc, were managed with a sharp focus on being stable stores of value; others, such as the yen, were managed with more focus on supporting export economies. Being an attractive store of value has a downside for real economies using the currency, and Bitcoin is to the Swiss franc as Ebenezer Scrooge is to the charity collectors for the Poor and Destitute.

As a medium of exchange, a store of value, and a unit of account, Bitcoins are a giant fail. There is no case in which they can or ever will hit the kind of 10× improvement you look for in disrupting an entrenched incumbent. And what if that competitor writes and enforces the laws and has an NSA and nuclear aircraft carriers?

Also, there is no chance a Bitcoin ecosystem can be tolerated at scale without imposing the exact same terms and conditions as those imposed on US dollars. If the super villain gets everyone to adopt his currency, the end game is imposing all the same taxes, reporting, and anti-money-laundering regulations on Bitcoins as on US dollars. Otherwise, you know the last act is the Navy SEALs clambering down ropes into this replica Fed and blowing the place up.

Please. If Bitcoin is the future Linux and not the future Segway, it has to lose the Bitcoins.

Just as people are creating Bitcoin-like Dogecoin, Ponzicoin,2 and so on, the future is Bitcoin-like blockchain APIs to transfer all manner of assets, stocks, real estate deeds, and, above all, the most popular asset in the world — the US dollar.

If you want an international transfer, set up a pool of pesos tied to a Bitcoin API along with a pool of US dollars and then set up an exchange where you offer to exchange one for the other. Any time someone buys pesos for US dollars, they have to be paired with someone buying US dollars for pesos at a market-clearing FX rate.

The only advantage of the Bitcoins themselves is that government is out of the loop, which is sort of a bug as far as the tax collector is concerned, never mind that seignorage goes toward burning electricity instead of building schools, roads, and the occasional aircraft carrier to keep that economy safe.

Like Linux, Bitcoin needs to become the plumbing and start working within existing financial frameworks.

So, hackers, please stop running mining rigs and burning up the planet. If it’s about a better institutional framework, access to electronic payments for the unbanked, cheaper payments, and financial services without too-big-to-fail rent-seeking financial institutions, then start building the startups that will enable them. Show us how Bitcoin can make the world a better place. Don’t try to “end the Fed.” Stop dreaming about making fiat currency worthless and unleashing the kind of financial disruption and chaos Bitcoin is supposedly designed to prevent. Just build things people love, to do the things they need to do, and with the assets that already matter. Otherwise, it’s just about disruption fetishism, geek privilege, and slightly harebrained ideology.

Everything that disrupts at one level must sustain at a different level.

And thus, the world must change in order for it to remain the same.

1VA Linux is now Geeknet, with a market cap of $120 million or so. Its hardware is gone, GitHub has eclipsed VA Linux’s SourceForge, and Hacker News and TechMeme have displaced its SlashDot paleo-news aggregator.

2Ponzicoin is not intended to be construed as an actual crytpocurrency. 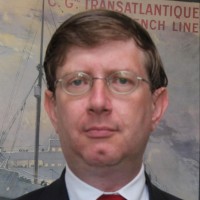 Druce Vertes, CFA, is the founder of StreetEYE, a social news aggregator for financial market news. Previously, he worked as an analyst, consultant, and IT manager at several major sell-side firms and hedge funds.

3 thoughts on “Bitcoin is the Linux of payments. And its killer apps will be for US dollars.”