The Benefits and Risks of Target Date Funds (TDFs)

What is the optimal amount of risk a client should have in their portfolio throughout their career?

This is not an easy question to answer, so it is not surprising that there are many different responses. Target date funds (TDFs) are, in theory, simple products that allow clients to focus on a single question: “How old am I?”

This data then roughly maps to their retirement age (e.g., a 40-year old has 25–30 years of career remaining), and the TDF automatically allocates risk to the fund along a predefined allocation mix appropriate for someone as they evolve toward retirement.

For example, most people generally appreciate that they want to take on less risk closer to retirement than during their younger days.

But the Funds Often Disagree with Themselves

In practice, an investor using an TDF is somewhat removed from having to think about and make short-term tactical decisions. TDFs automatically reallocate funds back to the predefined risk levels, which is helpful during extreme market moves.

This rebalance occurs only quarterly, however, which is not optimal. Extreme repricings of risk tend to last only weeks or months.

The key to a passive portfolio construction is to have a solid framework for what the overall most appropriate risk allocation should be.

We see from research, in addition to the mathematical idea that during retirement one places a higher utility on risk, that the function can be somewhat analogous to this estimated probabilistic expression:

Where adjusted-time is equal to years to retirement plus one half the years expected to live in retirement.

So someone 90% invested in risk at age 25 (with an expected retirement at 65 and total retirement of 18 years), would at age 65 show the following risk allocation level:

This optimal risk allocation, based upon the investor’s longevity and modeling uncertainty, provides for an allocation similar to what TDFs currently have. With (domestic) equities the largest risky asset in TDFs, one can see this concave-shaped result in the chart below.

Investments in cash and bonds mostly complement this.

The actual optimal path has a confidence interval around it, though what is most instructive here for our focus is on the general shape and location.

For example, we note that T. Rowe Price and the government’s Thrift Savings Plan (TSP) both under-allocate to equities (perhaps by 10% allocation) in one’s early wealth building years.

Fidelity and Vanguard continue to over-allocate to equities (by as much as 10%–15% allocation) as one is preparing to head into retirement.

Vanguard only gradually glides their risk down linearly, and it doesn’t accelerate their risk reduction in the concave shape that we show is optimal.

That TDFs differ from one another in so many ways suggests that there is no single variable assumption among them. Instead it is a mystery. For example, the difference among the TDFs is not as simple as one thing — say, the longevity risk assumption.

So this leaves a greater onus on investors to think carefully about the TDF that they select, since they are not just identical products with slightly different fees.

First, it is imperative for retirees to think about their end of life first. They might live longer than expected, and this is one risk we cannot diversify away.

Know also that they may not be financially employable or productive throughout the years until their expected retirement age. And while difficult, this assumption implies the need for an even greater savings cushion in retirement.

There are research and resources available for older Americans who may find themselves with diminished financial reasoning skills later in life. They should safeguard much of their allocation trajectory as soon as they are capable. As uncomfortable as it may be, it is better they confront their thoughts on your mortality now, and then plot their optimal risk path.

It is critical to remember that no one will be able to perfectly identify a specific and unwavering optimal risk path. And our unique situations are so complicated and different from one another that no one model will get it right for everyone.

The error and confidence interval around such estimates is high, so it is most critical to think about the optimal risk path only in terms of its general location and shape.

The reason for this uncertainty is that market and macroeconomic growth in any region is subject to considerable model and long-term growth forecast uncertainty, which impacts the abilities of wise central planners. In life we have to assume a middle path and consider TDFs in more retirement-oriented accounts (less subject to income cash-flow changes).

Even TDFs are not cemented in their philosophical views. The risky asset allocation away from bonds can be modified by the fund company too, as we currently see with the government’s TSP shortly after my article here. 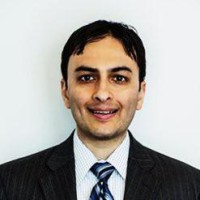 Salil Mehta, CFA, is a former leader of the US Treasury/TARP's analytics team as well as PBGC’s policy, research, and analysis, and their first risk analysis function. He serves as an adjunct professor of statistics at Georgetown University, on the board of the American Statistical Association's peer-reviewed journal, and on BlackRock's FutureAdvisor council. Mehta is the creator of the Statistical Ideas blog and the author of Statistics Topics.