The Future of Digital Banking: What’s Next?

Rather what is happening now is more simply digitized banking, he explained in a Take 15 interview with Lauren Foster. What does that mean? “We’re seeing 300-year-old products be manifested and distributed via websites,” he said.

But because of consumer need, this digitization will ultimately lead to innovative banking products.

So what is fintech?

“Mostly, I feel it’s a mentality,” Brear said, “the mentality of aligning small teams who are highly skilled to achieve difficult things.”

In the banking sector, fintech has the potential to reduce fees.

“I’d say we do have free banking in Europe, by name,” he said. But this “free banking” is something of a misnomer. Large overdraft fines levied against some customers help finance free banking for others.

Much of the focus of technological development now is on international payments with the goal of reducing these administrative costs, according to Brear. In addition to increased trust within the international payment process, he expects lower operating costs and greater accessibility.

Banks are exploring how blockchain technology can help execute payments. For example, Santander has launched technology to transfer money using a blockchain, partnering with Ripple, a start-up, working to streamline the international money transfer process.

“A lot of emphasis has been placed in payments. We’ve seen the Ripples of the world do really interesting things, in terms of either international payments or local payment systems,” Brear said.

Fintech will increase competition and innovation in ways never before seen in the banking industry, Brear predicts. “Arguably, now you can get 25 people with small amounts of investment disrupting very, very large parts of the industry,”

The most exciting part of this process is the resulting immediacy. “The impetus that is put into financial services to make real significant changes, by fintech, by regulation, by technology, is just amazing,” he said.

Even though digital banking should increase accessibility and lower costs, fintech can disrupt large segments of the finance industry. The most disrupted businesses, according to Brear, will be those where “you’ve got the largest amount of paper being pushed around.”

“Places like asset management, for me, are where significant changes could happen, both in terms of the trust around the actual interactions and the value exchange that’s taking place,” said Brear.

As an example, he mentioned the International Swaps and Derivatives Association (ISDA) digitization into a blockchain at Barclays. The “smart contract” that Barclays created is electronic and contains information determined by ISDA, limiting the differences in documentation among banks, decreasing delays, and eliminating the need for administrative intervention by lawyers or bankers.

In terms of security, this blockchain technology ensures a record of the derivative transactions, easing the costs and time that regulators spend reviewing these contracts.

“That, for me, is an implementation that has the potential to take billions of pounds out of that industry,” Brear said.

Fintech will make banking cheaper, yet it will eliminate jobs in certain parts of the industry. So fintech may increase trust and accessibility, but decrease the need for manual, human assistance.

“The amount of industries likely to see wholesale decimation in terms of what humans do within them, is quite scary and quite significant,” said Brear, who predicts the future will be completely automated.

But we are not there yet. In fact, we’re only 1% of the way there, according to Brear. 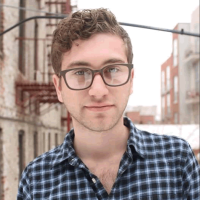