A new report shows an alarming lack of succession planning around the world. In the United Kingdom, a report challenges the country’s current state of corporate governance. In the United States, the dream to end vote confirmation comes closer to reality, and activist hedge funds decide they need a lobbyist. This and more corpgov news spanned the globe in May.

If your Portuguese is rusty and you are a governance geek, you are in luck. The English version of the Brazilian Institute Corporate Governance code (5th edition) was released recently. One of the most talked about parts of the code is how it deals with the issue of “one share, one vote.” The language of the code states:

In cases in which the principle of “one share, one vote” is not observed, it is essential that the by-laws/articles of incorporation contain a sunset clause for the extinction of such asymmetries, especially in publicly traded companies. In companies where shareholders choose to adopt structures that do not provide symmetry between political and economic rights, fair treatment must be guaranteed to all shareholders. That is, proportional to their interest in the share capital, with regards to their economic rights,and in any significant event, such as a transfer of control or corporate reorganizations.

The French business associations AFEP and MEDEF updated their corporate governance code (in  French) recently and are seeking comments on it by 8 July. The code covers such issues as the role of the board, board diversity, board evaluations, and director independence. The update focuses a great deal on remuneration issues; nearly half of the 29-page document deals with these issues.

The International Corporate Governance Network (ICGN) is conducting a survey on differential voting rights (dual-class shares). You have to be an ICGN member to respond, but it should be an edifying experience even if you are not to take a look at the survey. It asks members their thoughts on dual-class shares and whether they approve of them and use them, as well as whether they affect valuation. The survey closes 20 June, so we will share the results in next month’s roundup.

CEO succession planning is often an overlooked governance risk because it is often a long-term issue that many investors do not focus on in their day-to-day and quarterly analysis. A recent report by Sustainalytics highlights that in many markets, succession plans are an afterthought, as shown in the following chart providing the percentage of firms with a succession plan in respective markets. 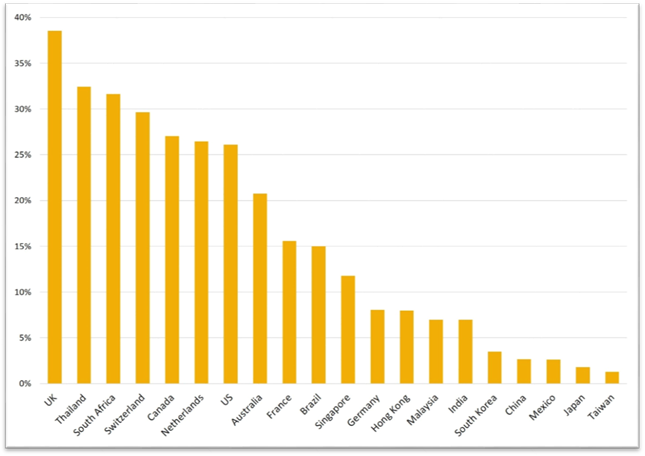 In a report released in May by the Big Innovation Centre, the group takes the controversial position that the United Kingdom should make some shareowner rights and corporate governance changes that some may view as rolling back shareowner protections. The report posits that the current UK system is fragmented with a diversified shareholder base, a particular legal and regulatory system that imposes short-term profit maximization on company boards, and too few forces that counteract these tendencies.

The Big Innovation Centre states that the launch of the report marks the start of a major consultation on options for change. These encompass corporate law, corporate governance, executive remuneration, equity ownership, shareholder engagement, disclosure, accounting practice, and taxation.

The issue of proxy plumbing and the integrity of the proxy voting process is one that comes up again and again in corporate governance circles and one that the proxy voting giant Broadridge tackled in its recent End-to-End Vote Confirmation Announcement.

The Working Group met regularly to:

According to the announcement, under the current broker and bank nominee qualification parameters, vote confirmation can be implemented without any regulatory changes.

Activist investors recently formed the Council for Investor Rights and Corporate Accountability (CIRCA) to lobby on their behalf in Washington, DC. The founders of the group include activist hedge fund luminaries Bill Ackman, Carl Icahn, and Dan Loeb.

The roll of activist investors continues to be a contentious one in the US capital markets, as evidenced by our recent poll of members who couldn’t quite decide whether activist investing is helpful, harmful, or a short-term nuisance.

Considering that investors themselves cannot decide whether activists are good for the US market, maybe the only question to ask of CIRCA is, What took you so long?