The NIFTY 50 No Longer Reflects the Indian Economy

The NIFTY 50 has fallen far behind the Indian economy.

Indeed, when it comes to earnings growth, the most popular benchmark index in India has not only trailed the larger Indian economy over the last decade, it has also lagged behind the S&P 500 by a country mile. Yet India’s economic growth is vastly outpacing that of the United States. This bizarre phenomenon has far-reaching implications for Indian investors.

In the United States, on the other hand, nominal GDP growth over the past decade has hovered at barely 4%. Nevertheless, S&P 500 earnings have grown at 12% annually. That’s a full 400 bps faster than the NIFTY 50 — and that’s without converting NIFTY 50 earnings into US dollars!

Why do the benchmark indices in India and the United States display completely opposite trends relative to GDP growth and what implications does that have for investors?

Why does the NIFTY 50 lag the Indian economy?

To understand why the NIFTY 50 no longer captures the dynamism of the Indian economy, a good place to start is the index as it stood in 2009.

On the face of it, the 10-year share price return from investing in the index is a respectable 14%. But that figure is deceptively flattering. The NIFTY 50’s quality — or lack thereof — is reflected in returns from the 50 stocks that composed the index in 2009. Such an equal-weighted portfolio would yield an annual return of -1% (CAGR over 10 years). And, again, that’s after beginning the measurement period in February 2009, when the market was close to its post-Lehman Brothers nadir.

If the typical investor’s cost of equity in Indian stocks is 15%, only 19 constituents of the NIFTY 50 delivered returns in excess of that. And that figure is also enhanced by the February 2009 start. These 19 outperformers — ranked in descending order of performance — are HCL Tech, TCS, HDFC Bank, Maruti Suzuki, M&M, Zee, HUL, HDFC, Wipro, Tata Motors, BPCL, Infosys, ITC, Siemens, Hindalco, ICICI Bank, Grasim, L&T, and Sun Pharma. With four exceptions, all of these firms are from such relatively capital-light or business-to-consumer sectors as consumer, auto, pharma, and banking.

The other 31 companies whose 10-year returns are below the cost of capital are from balance-sheet heavy sectors: power, construction, metals, telecom, real estate, and oil and gas. Together, these accounted for roughly 30%–35% of the Indian economy, according to government data. And yet these companies made up two-thirds of the companies in the NIFTY 50. That leaves little room in the index for firms that represent more vibrant sectors of the economy.

The over-representation of capital-heavy sectors explains much of the NIFTY 50’s sluggish performance. Why the NIFTY 50 continues to have such a high proportion of companies from balance-sheet heavy sectors is not immediately obvious.

Moreover, over the last five years, the NIFTY 50’s performance has increasingly diverged from that of India’s nominal GDP, after faithfully tracking it for much of the preceding decade. This suggests many of the drivers of the Indian economy are no longer in the listed market. For example, taxi aggregators, like Ola and Uber; online retailers like Flipkart and Amazon; electronics goods manufacturers; car manufacturers other than Maruti; hotels besides Taj, Oberoi, and Lemontree; etc., are all unlisted.

Most of what affluent India buys no longer appears in the listed market either. The companies that cater to the wealthy can access capital at low cost without entering the stock market, so their contribution to GDP is not reflected in any index. If, as the Indian economy matures, the unlisted world continues to provide capital at lower cost than the listed market, then the gap between GDP and market cap will widen further.

So what are the implications for investors? 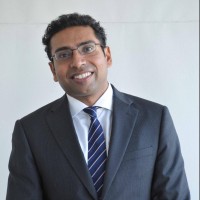 Saurabh Mukherjea, CFA, is founder and chief investment officer of Marcellus Investment Managers. He is the former CEO of Ambit Capital and played a key role in Ambit’s rise as a broker and a wealth manager. When Mukherjea left Ambit in June 2018, assets under advisory were $800mn. Prior to Ambit, Saurabh was co-founder of Clear Capital, a London-based small-cap equity research firm that was created in 2003 and sold in 2008. He is a CFA charterholder with a BS in economics (with First Class Honours) and an MS in economics (with distinction in macroeconomics and microeconomics) from the London School of Economics. In India, Mukherjea is a SEBI-registered research analyst and he has passed the SEBI’s approved exams for investment advisers. In 2018, at SEBI’s invitation, he joined SEBI’s Asset Management Advisory Committee. He has written three bestselling books: Gurus of Chaos (2014), The Unusual Billionaires (2016), and “Coffee Can Investing: The low risk route to stupendous returns” (2018).