Will computers completely replace humans in financial management? Can robots carry out the asset management functions, the financial operations, and all the other tasks now performed by people?

Certainly, compared with most other industries, finance is especially dematerialized: Robots in finance don’t need hands, arms, and legs — just the capacity to crunch numbers. And silicon chips can do that incomparably faster than we can. The problem is that even if finance creates a world of its own, that creation deeply interacts with the real world. Just like a hurricane in the high atmosphere can devastate everything on land, catastrophes in the financial world have real consequences on real people’s lives.

So can we trust these machines?

This may sound like science fiction, but science these days moves faster than fiction and, as scary as it sounds, we already live in a world that is at least partially controlled by machines. We humans must now adapt to the new reality we ourselves have created. As with evolution, stepping backward is not an option.

Before considering the potential threat posed by machines and artificial intelligence (AI), whether to finance professionals or the larger economy, we should acknowledge that financial markets were creating catastrophes long before computers.

Robert J. Frey studied the size and frequency of financial crises over two centuries. When properly monitored with appropriate “fat tail” models, these events haven’t evolved much, despite differing regulatory regimes and increasing computerization. This suggests that from a pure catastrophic-risk standpoint, massive automation will not alter the frequency and size of catastrophes in the financial ecosystem all that much.

But who will gain and who will suffer from this digital revolution? And will machine learning terminate human advisers?

Thus far, behind the machines are the people who programmed them. And that dynamic will continue for at least the next generation. While computers have started to generate code, those computers still have to be programmed by humans. Thus those who can create and administer the technology used in financial markets, whatever their role in the service chain, won’t lose their jobs. On the contrary, they will be in high demand.

Machines in finance are not ready to work on a stand-alone basis. They require specialized knowledge, whether economic, financial, statistical, or mathematical. Currently, at best, they can augment the efforts of expert humans. They cannot fully replace them. The health care field demonstrates this dynamic quite well: Imaging systems, blood analyzers, and sophisticated computer diagnostic assistants help human medical professionals perform their jobs, but they cannot do the job for them without putting lives at risk. The best outcomes, therefore, develop from clever cooperation between humans and machines, not from one ignoring the other, however sophisticated.

Despite the bold forecasts of the sorcerer’s apprentices, the computer scientists working with the emerging technology of machine learning and its associated innovations, such technology can only be efficiently applied by experienced humans. And for good reason. An algorithm isn’t necessarily less risky than a human.

Think of two specific “technologies”: the pure biological operation of the human brain (setting aside the more loaded questions of consciousness, intelligence, etc.) and the “silicon intelligence” of computers. The human brain comprises a highly connected, multi-threaded system with extremely slow computer processing units: a few hundred cycles per second versus the several billion of today’s laptops. The brain’s trillions of synapses compensate for the reduced processing speed, so at least several billion operations are still performed each second.

The adult brain has been trained for decades. It also benefits from a billion years of evolution. Practically speaking, the main difference between the human brain and computers comes down to risk management. The human brain can anticipate and plan for all sorts of conceivable scenarios. It also knows that not all information has the same value. Some data deserves its full attention and requires immediate processing. Other data can simply be ignored.

The computer, meanwhile, can sort through a range of “school cases” that it learned from to arrive at the optimal decision should one of these cases occur. But it lacks the long-term experience to safely discard useless information, even if doing so is critical for an appropriate and timely reaction. Processing all the available information, whatever the speed of the computer, will create too slow a decision-making process.

Moreover, whether it’s machine learning or some other form of AI, it is still — and needs to be — an expression of its designer. That’s just the opposite of what we often hear these days, when people say, “Let the data speak.” Data will only show what it contains, which is the limited size of its training set.

That’s why those who can best deploy a human–machine hybrid approach will have the advantage in the years ahead.

So those who fail to adapt to the digital revolution will certainly suffer career risk. Whatever our expertise, we will have to learn to “cooperate” with AI one way or another.

But machines do not pose the existential threat to human financial professionals that some claim. Nor do they offer the universal panacea that some computer scientists seem to dream of. 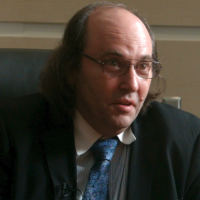 Raphael Douady, PhD, is a French mathematician and economist specializing in financial mathematics and chaos theory at the University of Paris I: Panthéon-Sorbonne. He formerly held the Frey Chair of quantitative finance at Stony Brook University, and was academic director of the French Laboratory of Excellence on Financial Regulation. He earned his PhD in Hamiltonian dynamics and has more than 20 years of experience in the financial industry. He has particular interest in researching portfolio risks, for which he has developed especially suited powerful nonlinear statistical models, and systemic risk. He founded fintech firms Riskdata (risk management for the buyside) and Datacore (model portfolio of ETFs). Douady is a member of the Praxis Club, a New York-based think tank advising the French government on its economic policy and other related topics, and sits on the board of Friends of IHES, a foundation supporting the Institute des Hautes Etudes Scientifiques (the French sibling of Princeton IAS). He is a former fellow of Ecole Normale Supérieure in Paris and was awarded a gold medal at the International Mathematical Olympiads in 1977. 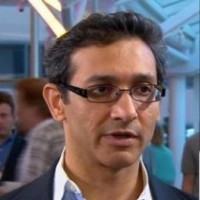 Milind Sharma is CIO at QuantZ Capital and CEO of QuantZ Machine Intelligence Technologies, which combines factor investing with machine learning. He has 22 years of market experience include running hedge funds, mutual funds (~$30 billion at Merrill Lynch IM) as well as running proprietary trading desks at Deutsche Bank and RBC Global Arbitrage. He was also a co-founder of Risk/ Quant Strategies at Merrill Lynch IM after a similar role at Ernst & Young. Sharma has an MS in computational finance and an MS in applied math from Carnegie Mellon where he was also in the PhD program in logic. He attended Wharton, Vassar, and Oxford. He has published extensively on hedge funds and is a frequent speaker at conferences.

Paul McCaffrey is the editor of Enterprising Investor at CFA Institute. Previously, he served as an editor at the H.W. Wilson Company. His writing has appeared in Financial Planning and DailyFinance, among other publications. He holds a BA in English from Vassar College and an MA in journalism from the City University of New York (CUNY) Graduate School of Journalism.

1 thought on “Rise of the Machines: Investment Jobs Now Redundant?”