Biotechnology is hard for most buy-and-hold value investors to understand and forecast.

Since a typical small biotech company has no sales, negative cash flows, and negative earnings, many of the conventional financial multiples have no economic significance. Prices can change based on investor sentiment and suffer from high variance due to the binary nature of clinical trials: Drugs either pass or fail.

So if we can’t rely on discounted cash-flow models or multiples, how can we invest in biotech?

Also, in looking at several companies with high hedge fund ownership, I noticed a preponderance of health-care–specific hedge funds as opposed to more generalist funds like Pershing Square or AQR that invest in any sector.

The efficient market hypothesis (EMH) holds that the way to generate higher returns is by increasing systematic risk, but my research suggests this may not apply to small-cap biotech. The smart money in the industry has higher hit rates overall and can pick more big winners and avoid more big losers.

While politicians have some influence on drug pricing, biotech stock prices rise and fall based largely on the probability of a drug passing or failing clinical trials. Even if politicians attempt to cap drug prices, though the overall industry may suffer, there will still be winners and losers depending on which drugs are approved. Therefore, biotech hedge funds can pick the relative winners and losers regardless of the political situation.

By contrast, in the energy sector, the most powerful predictor of returns is the price of oil itself. So an energy hedge fund has to anticipate whether oil is going up or down. If the fund goes long on low-quality companies, it will outperform when oil prices are rising but underperform when they are falling. In general, the factors in the energy industry that work well in one scenario will fail in another.

In my analysis, I took all the biotech stocks in the Russell 2000 Index from 2007 to 2015 — about 105 each month on average — and categorized each firm for each month into four quartiles based on hedge fund ownership as a percentage of shares outstanding. Q1 contained the least hedge fund ownership and Q4 the most. I also categorized short interest as a percentage of a float, with Q1 having the least short interest and Q4 the highest.

I then calculated the one-year forward returns for each stock in the index at the end of the month. For companies that were acquired or went bankrupt before the 12-month forward date, I took the total return from the given date to the final trade date. Below are the average short interest and hedge fund ownership of each quartile.

The chart below shows hit rates for each quartile of hedge fund ownership. All one-year forward return buckets are mutually exclusive. For example, the bluish-grey <-15 bucket indicates that 20% of the stocks in Q1 earned returns between -15% and -40%.

The results were similar when it came to short interest.

Distribution of Returns by Short Interest

Robustness over Time and Holding Period?

So are these results likely to be sustained or are they just the product of a few especially strong years? To find out, I calculated the information coefficient over time, which I computed as the correlation between the expected decile return rank and the actual decile return rank.

The results demonstrate that the two factors have worked most of the time, and when one factor hasn’t performed, the other has helped mitigate some of the losses.

Moreover, this strategy holds for periods other than one year, as we can see below.

Putting This to Work

While this analysis does not address such questions, I have tested hedge fund ownership in other industries and found little to no correlation with forward returns. This leads me to conclude that health care–specific hedge funds are superior investors in the sector.

So what’s the best way to apply this study? Use it as a screen: Identify stocks with the highest probability of outperformance and then exercise your discretion in choosing among them. 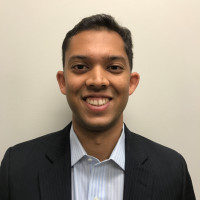 Akash Goyal is an institutional asset management associate at PNC, where he conducts quantitative research for the firm’s multi-factor small-cap equity group. He has passed all three levels of the CFA exam. Goyal holds a BA in economics from the University of Chicago and is currently an MS candidate in computer science at the University of Chicago.